1 Review
No public bathrooms. There are plenty of bars or restaurants nearby with toilets.
Lots of options. From beach vendors selling coconuts and rum to upscale hotels.
Free street parking available.
Nudity optional.

It doesn't get better than this in Mexico.
You can walk the length of the beach as naked (or un-naked) as you prefer. No one cares. Highly recommended getaway, especially if you don't enjoy the all-inclusive vibes of Huatulco's paid beaches. Zipolite is all about laid back vibes and acceptance - it is one of our favourite beaches in North America.

The surf can be strong in Zipolite

Rocky cove near El Alquimista - the current can be strong here

Zipolite's surf can be dangerous at times

Playa del Amor has a vibe of it's own

That is how we’d describe Mexico’s first and only legal public nude beach. It’s the kinda place you discover and want to keep to yourself so it doesn’t change. But the secret is out and so far Zipolite is still staying true to everything that makes this small town great.

Laid back vibes prevail here, whether you’re a backpacker sleeping in a hammock on the beach or a cashed up visitor staying at the many hotels – everyone gets the vibe. There are no all-inclusives or chain hotels here and that is definitely a good thing. You can be naked or topless or dressed. No one cares. It’s a little grungy, totally hippie and full of freedom. Zipolite is a small authentic Mexican beach town that embraces diversity and counterculture.. including nudity. Relax, let the inner hippie escape and you’ll fit right in!

The long, wide and sandy one mile (1.5 km) beach extends from the rocky outcrop next to Playa del Amor in the east, all the way to the bay opposite upscale Hotel El Alquimista. Nudity is far more concentrated to the extreme ends of the beach, with the majority of higher end visitors on the western side of the beach in front of Hotel Nude, Hotel Naked (do you get the theme here?!) or El Alquimista.

The more affordable hostels and bars tend to be on eastern side of the beach, Hostel Casa Moringa is a popular low budget hang and we found a lot of bars around here do a great happy hour. Nearby here you will also find Playa del Amor, which is a small cove that has more of a gay presence. It is a popular place to watch the sunset because you will see it set directly into the ocean. The beach at Playa del Amor also tends to calmer than the rest of the beach. There are no bars or hotels here, instead a small vendor serves cocktails, beers and local mezcal. Access is via a small trail over the headland at the far end of the beach. We spent an afternoon here and watched the sunset before walking back the whole length of Zipolite fully naked (we were definitely not the only ones!).

Zipolite attracts all kinds of people – from young and solo backpackers, to families and older seniors who remember being here in the 70’s hippie boom. There is a wide rand of ages, body types and nationalities. It is perfectly fine to be naked anywhere along the beach and some hotels (like Hotel Nude or Hotel Naked) allow nudity everywhere, however they ask you to cover up if you’re eating inside at the restaurant.

Nudity is tolerated by the locals on the beach but not accepted in the shops or town. It is a great place to experience a nude beach for the first time and the friendly locals won’t even give you a second glance. Beware of the surf which can be rough and not recommended for weak swimmers. The rocky area in front of El Alquimista can be especially dangerous with strong currents pushing swimmers onto rocks. Lifeguards not only patrol the beach, they also rent out surfboards and bodyboards for a reasonable price. Very handy! American and Canadian visitors were definitely in the majority when we were here from January to March to escape the cold.

The main road of Av. Roca Blanca runs parallel to the beach and access is easy. The small town is filled with inexpensive shops and funky dining establishments. The road closes to traffic around 5.30pm each night when local markets and vendors setup in the street. It’s a great place to explore after a day at the beach and the food + crafts are stunning. You could take a collectivo (small bus) to / from nearby villages like Puerto Angel or Mazunte for 15-40 pesos, but be careful as they usually stop running early in the evening. There aren’t any other public nude beaches nearby and Mazunte has more of a surf culture and yoga vibe.

Beware that the ATMs in Zipolite are extremely unreliable and often run dry. There is one at Hotel Nude and another at Hotel Adoquin which is on the main street of Av. Roca Blanca. When we visited both ATMs were empty for days and we needed to convince a cab driver to take us to Puerto Angel to get cash. Unfortunately (or fortunately) the cash free world is yet to arrive in Zipolite!

To get to Zipolite from Huatulco Airport the cost effective option is to leave the airport and get a local cab for 600 pesos at the small taxi stand located just outside the entrance. The alternative option is an 'approved' cab from the airport rank which will cost 1000 pesos. Taxis from Puerto Escondido should cost 1000 pesos and from Huatulco downtown to Zipolite 800 pesos. Agree on the price before you get inside the cab to avoid any awkwardness.

Large ADO buses also regularly travel the main route from Puerto Escondido to Huatulco, however you would need to get off at nearby Pochutla and find local transportation to Zipolite. Hiring a car seems to be an expensive option and it doesn't seem like anyone does it in this part of the world. Whatever mode of transport you choose, beware that the drive is mountainous and winding. It is not for everyone!

The Zipolite Nudist Festival started off small as a gathering for the Mexican Nudist Federation but it is big business now. The festival happens in early February and attracts people from all over the world.

Nearby Mazunte is definitely worth a visit, even if you just go to see the turtles at Tortugas Mazunte. It is a rehabilitation and educational centre for the study of turtles. There are LOTS of turtles and info about them.

While in Mazunte join the pilgrimage to Punta Cometa. The sunrises and sunsets here are epic - follow the well worn trail up the road past Cafe Cometa. All the locals will point you in the right direction and you definitely will not be alone at sunset. It is a great place to bring a snack and watch the sun sink into the Pacific Ocean. We didn't bring bug spray or a torch and we definitely should have! Taking alcohol here is forbidden but we did see a few people drinking wine very very discretely. Zipolite is a small town of only 1000 people but there are lots of accommodation options - everything from hammocks on the beach to private suites overlooking the water. Beware that the eastern end of Zipolite can be very quiet at night and we heard a few people mention it was much too desolate for their liking. So if you'd prefer to be closer to the action we'd advise staying near Av Roca Blanca and avoid the eastern section of the beach.

Note that prices are significantly higher during the peak season from November to March. The Zipolite Nudist Festival in early February also fills up hotel rooms very fast.

Here are some recommended hotels on the beach where clothing is optional:

Hotel Nude -
The OG of nude hotels. Hotel Nude was the first hotel dedicated to nude visitors in Zipolite and it still very popular with purists. There are two clothing optional pools, including one that overlooks the beach (photo below). You are asked to cover up while inside at the restaurant, but apart from that you're free to stroll naked wherever you want.
The food and drinks at Hotel Nude are exceptional and you have easy access to the main street with stores, bars, restaurants etc.. Be advised that the hotel can sometimes have more of a 'party vibe' during Mexican holidays with DJs and music until the early hours of the morning. If that is not your scene (as it wasn't ours), plan in advance or ask to have a room away from the local sand dancefloor. 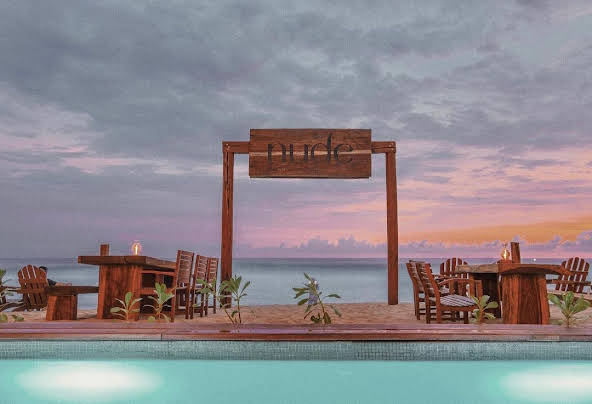 Hotel El Aquimista -
This is the pick of the hotels if you want more of an upscale vibe and fine dining to match. Hotel El Aquimista has arguably the best restaurant in Zipolite with great views to match. While nudity is not allowed in the hotel or pool areas, you are located directly behind a quiet cove that is very popular with nudists (from the hotel and elsewhere). Avoid swimming near the rocks on the right hand side, when we were visiting we saw people get way too close to the action and almost end up in serious danger.
The hotel is also big with the yoga crowd, so expect lots of mats and health shakes at breakfast in the morning! 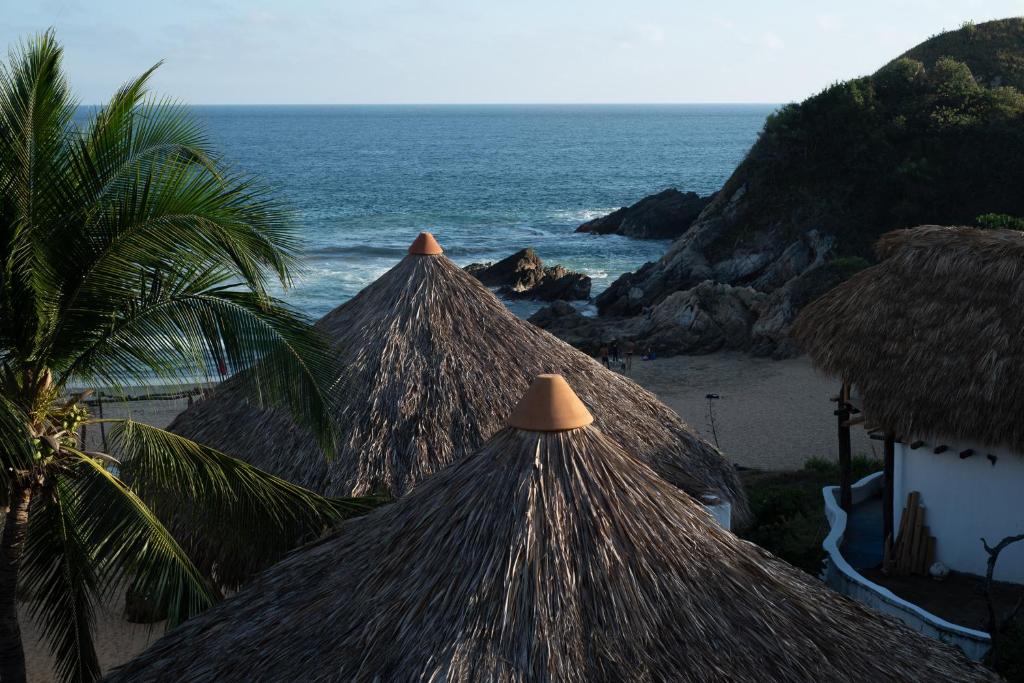 Hotel Buda Mar -
Buda Mar is a fairly new hotel in Zipolite but seems to be gaining popularity very fast. It has its own clothing optional pool and is located close to the main street for easy access to restaurants, shops etc..
People rave about the friend staff and the location on the beach is normally nice and calm. 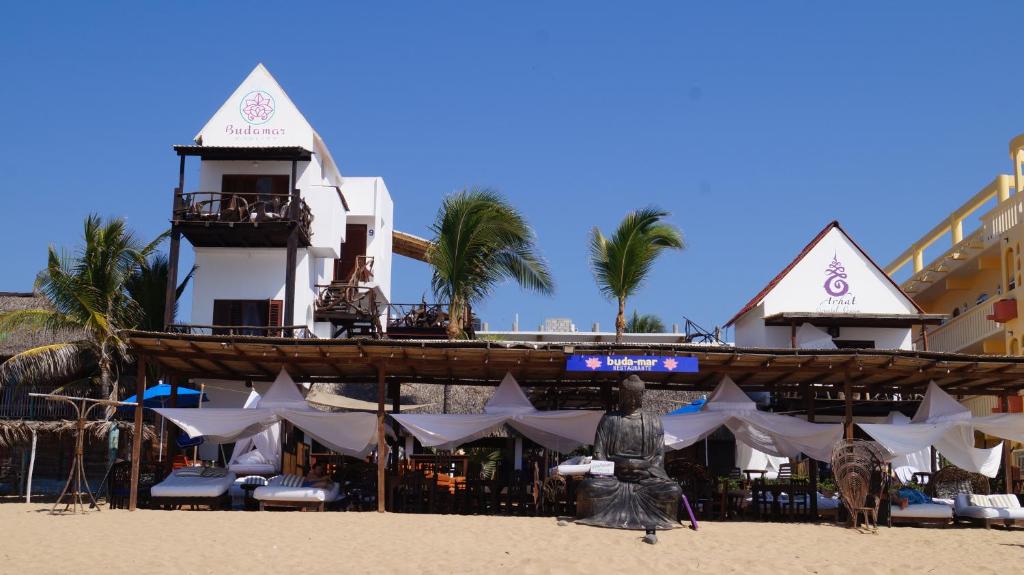 Hotel Neptuno -
Clothing optional and very affordable. Hotel Neptuno is on the beach but about a 10min walk from the main street.
Cheap and relatively cheerful, it is a step above cheaper dorm accommodation.

Hostel Casa Moringa -
Not clothing optional but located very close to the beach. Casa Moringa has dorm and double rooms with mostly shared bathrooms. You could save a lot by staying here and it gets mostly positive reviews. They have a kitchenette you can cook in and a large rooftop patio.
The hostel is on the far east side of the beach, close to Playa del Amor and about a 15min walk to the main street. 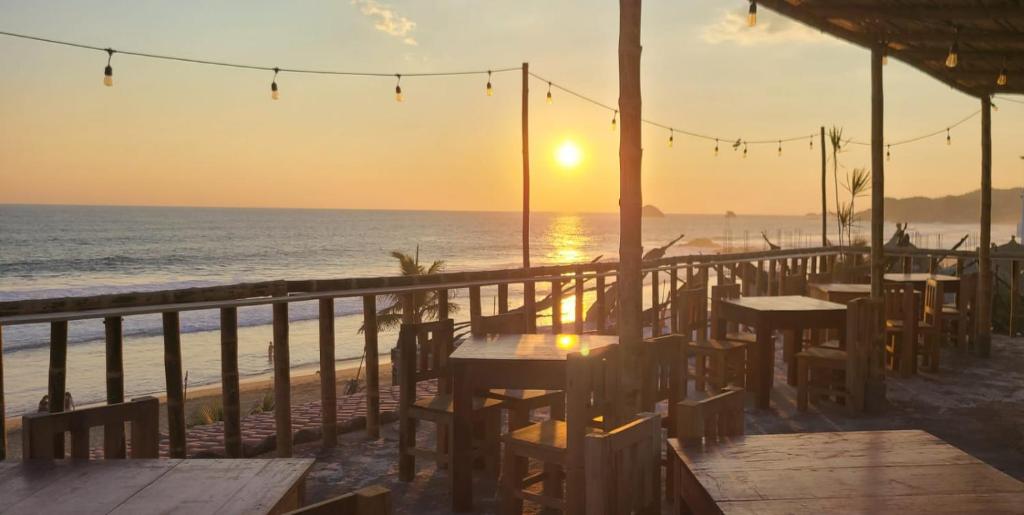 Do as they do in Zipolite!
#nofilter needed for sunsets like this… well, not much is needed at all for one of Mexico’s only nude beaches.
The hippy vibe of the 70’s persists here, without large all inclusive hotels or chain restaurants.
📸👨: @elamodelescandalo
#Zipolite #Atardecer #MiChicaDeHumo #Desnudos
#mexico #nofiltertraveling #travel #mexican #beachbum #adventure #shetravels #desnudo #travels #travelgram #travelphotography #travelblogger #skinnydippin #skinnydip #sunshine #beach #positivebodyimage #bodypositivity #getaway #vacation #holiday #oaxaca #pacificocean ...

Find awesome listings near you!